How Long Does it Take to Form a New Habit? 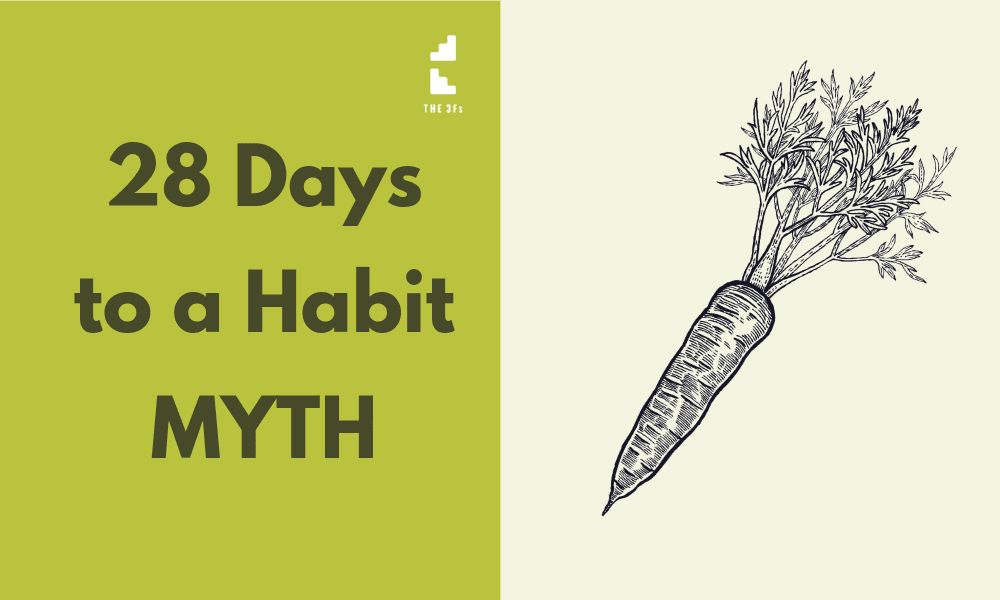 Ever heard the idea that it takes 21 days to form a new habit?

Spoiler alert: NONE of them is true.

There is NO "fixed" number. Here's why:

It’s because a new habit is formed through the combination of 3 factors, (which I remember using the mnemonic "AIR"):

One of the (several) problems with building new habits using ONLY repetition is: it relies on WILLPOWER.

And if we’re relying on it, let’s define what it is! How about this definition:

The “21-63 days” carrot is hung in front of us with the promise “it’ll be easier and more fun … sometime sooooooooon.” Or more sneakily, “you won’t even realise you’re DOING it … if you just stick at it long enough!”

Yet when we already WANT to "do the thing" … we don't need willpower. Which is great, because willpower is typically feeble and has little stamina … so it's not a very helpful tool to rely on to keep us doing "the thing we don’t want to do".

It doesn't take 28 days (or 63 or any specific number) to form the habit of checking Facebook – it's often a matter of 3-5 days.

Because the INTENTION is (often) VERY high. You start finding out what your friends are doing. You want to know who’s “liked” or commented on your “hilarious” photo.

Within a few days "not checking" feels like you’re missing out!

And just like that, you’ve developed a new habit.

The REAL trick to creating a new habit is not to rely ONLY on repetition. Do what your brain WANTS you to do – avoid pain, seek pleasure.

Give “the thing” INTENTION, and then enough ATTENTION to keep the brain happy.

For a smoker, developing a habit of “not smoking” is “anti-brain” – it’s fighting with what the brain wants.

Developing a habit of “breathing freely, smelling fresh and feeling fitter” … much more “brain friendly”. More Attention and Intention, so less Repetition needed. The stronger the Intention, the quicker the new habit forms.

Developing a habit of “reaching out to prospects” – could be “anti-brain” for some, and “brain-friendly” for others.

If it’s “anti-brain” for you, what’s a more “brain-friendly” habit to build?

How about “reach out and compliment 3 people every day”?

Would that be a bit more “brain-friendly”? Would it need less willpower?

If it feels good … you’ll do it more often.

And if it doesn’t feel good … be prepared, because you’ll need a LOT more repetitions to make it a habit.

Does this make sense?