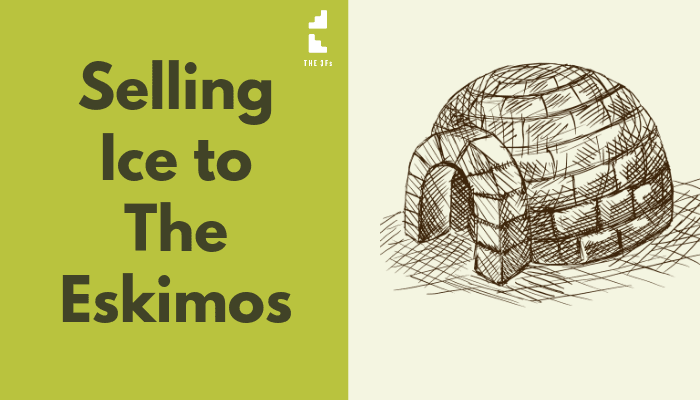 I heard someone use a common expression the other day …

“That guy could sell ice to an Eskimo!”

We’ve all heard it. And we all understand it … it’s generally used as an acknowledgement of someone’s impressive sales skills.

It got me thinking about the idea from a far more literal perspective though.

What if someone actually was selling ice to Eskimos. What would that mean for THEM, as a business owner?

Well, it would clearly mean they were good at sales … and probably marketing. The saying exists for a reason, after all.

Eskimos aren’t your most obvious market for people in desperate need of ice.

So whilst this hypothetical ice-seller would have clearly achieved their goal of making the sale, or getting the client, I imagine that it probably wasn’t the easiest process.

They probably had to persuade the Eskimos to buy their ice. Probably had to negotiate on price. And they quite possibly had to change what they were selling; diversify their offering in order to appeal to more customers … Perhaps they had to offer different “types” of ice – big blocks, small cubes, crushed ice … maybe even dry ice … a totally different thing, really!

And those Eskimos who are buying the ice – given how much ice is generally available to them – I wonder how much they actually VALUE it?

What if the ice-seller was to get away from those cold northern regions? What if they went to the desert, for example, to sell their ice there? …

Given the general lack of ice to be found in a desert, the reaction would probably be quite positive. And I expect, it would be pretty easy to sell.

Next problem: there are not a lot of people in the desert, and those who are there are usually on the move … so they may buy enough ice to use immediately, for a temporary relief, but wouldn’t have any need for any more. I certainly can’t imagine anyone in the desert buying a big building-block of ice, given the speed with which it would disappear …

So, ice in the desert would have a certain limited demand … maybe the Eskimos are probably an easier market after all?

What if that ice-seller went somewhere “in between”?

What if he set up shop in your average hot country, in the midst of summer … somewhere where tourists arrive in their droves, where everyone wants cold drinks, and cold foods, and cold ‘things’ … and they want them regularly …?

Here, I expect, he would get a pretty positive reaction to his ice products, don’t you think?

These companies already have a problem. They NEED a lot of ice, regularly. And they’re going to value someone that can provide it for them.

And because they are valuing it, they’re probably going to be prepared to pay more for it too …

Which are the “best” clients for the ice-seller? It’s got to be those bar and restaurant owners in the hot tourist-filled countries … The ones that already have the exact problem our ice-seller is able to solve. The ones that don’t need to be persuaded to buy. The ones that see the value he provides to them. And the ones that are happy to pay for that value.

So all those years the ice-seller was trying to diversify his offering for the Eskimos … trying to change WHAT he was able to offer them, to broaden his appeal …

.. what he really needed to do was change his WHO.

He probably never consciously CHOSE his “who” to begin with. Never consciously decided to sell to the Eskimos … that was just how it started, and so he continued, trying to adapt his offer along the line, to try and better suit THEIR needs.

This is not an uncommon issue. In fact, it’s VERY common.

Many business owners find themselves wanting to attract “better clients” … clients that will pay more, that will value them more. Clients where it will just be that bit “easier”.

But maybe, like our ice-seller … it’s not them who needs to change.

Learn more about how to define you ideal client, and how you can package your offer for them on the Financial Security Program.

This website uses cookies to improve your experience while you navigate through the website. Out of these, the cookies that are categorized as necessary are stored on your browser as they are essential for the working of basic functionalities of the website. We also use third-party cookies that help us analyze and understand how you use this website. These cookies will be stored in your browser only with your consent. You also have the option to opt-out of these cookies. But opting out of some of these cookies may affect your browsing experience.
Necessary Always Enabled

Any cookies that may not be particularly necessary for the website to function and is used specifically to collect user personal data via analytics, ads, other embedded contents are termed as non-necessary cookies. It is mandatory to procure user consent prior to running these cookies on your website.