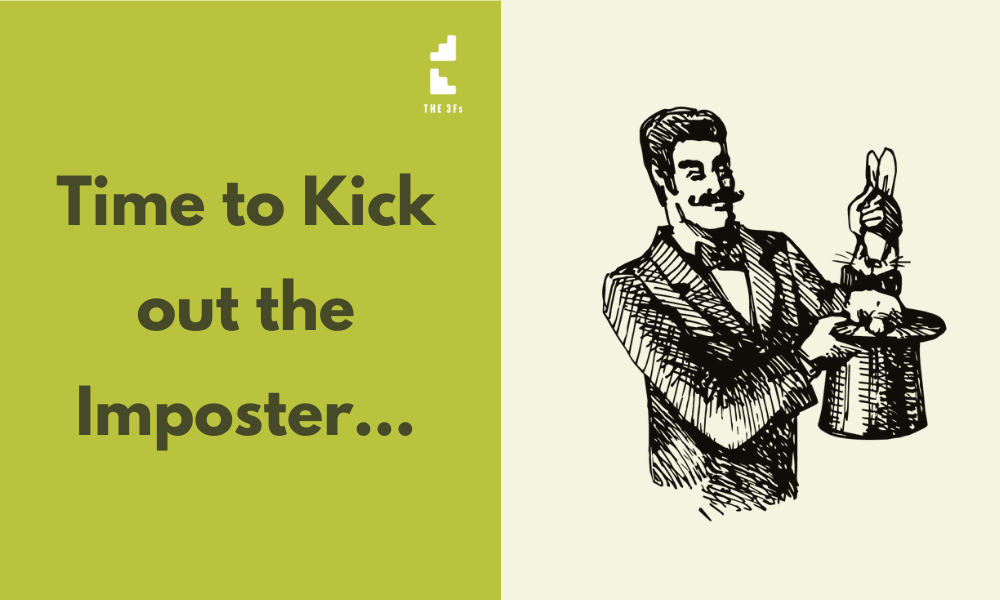 Imposter syndrome. I’m sure you’ve heard of it.

You may even acknowledge yourself as suffering from it.

It’s those feelings of self-doubt … that you’re not really that good at what you do – or certainly not as good as others are.

That you’ve just somehow, through luck, managed to get where you have in your career … but you don’t really deserve it.

It’s that feeling of being a “fraud” in your work.

And it’s a fear of exposure. That eventually, you’re going to be “found out”.

Well, if it does, you’re not alone. Far from it in fact, as it’s estimated to affect approx. 70% of people at some point in their lives…

That’s an awful lot of people. All of whom – despite being successful, despite having skills and knowledge and expertise and natural ability, and despite having worked hard – are ignoring all those facts, and instead are doubting themselves … questioning themselves … and worrying that they’ll eventually be “exposed”.

Ironically, people now often easily recognise imposter syndrome in others – and recognise it for exactly what it is – rubbish. Yet in themselves, they still believe it really is just a fluke. They really don’t deserve their success … they really aren’t good enough … they really might get found out.

Well, if that’s you, I can give you some good news.

You ARE good enough.

And even better news – you can push those imposter syndrome thoughts aside just by focusing on a few mutually supporting beliefs and ideas.

Imposter syndrome is a barrier to many people, and can have far-reaching impacts.

It can take on different forms, and has different characteristics within different people. From those who will only be satisfied with “perfection” to those who devalue anything that doesn’t come to them “quickly and easily”, and many others in between.

But whatever way it manifests, it can ultimately cause the same… often damaging … effects.

It might inspire you to push yourself harder … which some might not necessarily see as a bad thing … but this can lead to burn out, a lack of work-life balance, and worse yet, still feeling like a fraud due to the success that hard work brings.

Or it might lead to a downshift in your ambitions … revising your goals to fit what you believe you are capable of … thus stopping you from fulfilling your true potential.

It can cause people to procrastinate … continuously studying, learning, trying to gain a good enough level of “expertise” before you really get started … meaning you actually just keep postponing achieving what you’re really capable of.

Many people suffering with imposter syndrome feel that asking for help is a sign of weakness. So they suffer in silence, they work longer hours on things that others could help with … they waste time on things that aren’t their main skill-set, rather than acknowledge that they have a greater skill elsewhere that is more deserving of their attention. Again … delaying the achievement of what they’re really capable of.

And sometimes, worst of all, people allow a failure, or a hiccup, or a struggle to stop them entirely. They allow it to prove that they aren’t good enough.

But accomplishing things takes time. And learning … and improving … and building our skills is all part of the process, and all part of how we become our best.

And making mistakes … accepting that we’re not perfect, and will make errors … enables us to get much closer to that perfection for which we strive!

I think Thomas Edison summed it up pretty well when he said, “I have not failed. I’ve just found 10,000 ways that won’t work.”

How to Overcome it and Have More Confidence

So, how do you deal with it?

It’s all about mindset.

Imposter syndrome has an “inward” focus. It’s looking IN at yourself, questioning yourself, and it’s comparing yourself to others:

And is looking at others sending you off on a path chasing someone else’s dream? Success is subjective, after all. Do you really want to achieve what they have? Or do what they do?… Are you pushing yourself to achieve something that you don’t even really want?

So don’t let that inward focus overrule you. Instead, shift your mindset to focus on a few core things:

H: “Helpful” – focus on being helpful … to others, and to yourself.

A: “Authority” – focus on acknowledging that you do have skills. You do have knowledge. You are able to do things that others can’t. You ARE an expert … an authority … in your own corner.

P: “Plenty” – focus on there being plenty of people with problems that you can solve.

These three mindsets create a triangle of mutually supporting beliefs and ideas….

They take your focus away from the “inwards” – from the focus of you and what you can’t do, of the you compared to others … and they put your focus on the “outwards” instead … they focus on what you CAN do, focus on you and YOUR goals, and focus on WHO you can help and HOW.

Acknowledge your authority. Be honest about what you ARE capable of, and focus on that.

Because you don’t need to be better than anyone else …

… you don’t need to convince anyone that you are…

… you don’t need to do what others are doing …

… and you don’t need to be perfect (there’s always room to learn more!)

You just need to remember:

people out there have problems

you can use those skills to help people in need.

Imposter syndrome loves to internalise, and it loves to focus on the negatives.

By focusing your energy and efforts on these three beliefs, there is nothing for those “imposter” thoughts to cling to.

Because people DO have problems … you ARE an authority in your field … and you CAN help those people.

And that’s all you need to be focusing on.

Discover other ways to overcome imposter syndrome and boost your confidence in my 5 day FREE challenge … click here for more information.

This website uses cookies to improve your experience while you navigate through the website. Out of these, the cookies that are categorized as necessary are stored on your browser as they are essential for the working of basic functionalities of the website. We also use third-party cookies that help us analyze and understand how you use this website. These cookies will be stored in your browser only with your consent. You also have the option to opt-out of these cookies. But opting out of some of these cookies may affect your browsing experience.
Necessary Always Enabled

Any cookies that may not be particularly necessary for the website to function and is used specifically to collect user personal data via analytics, ads, other embedded contents are termed as non-necessary cookies. It is mandatory to procure user consent prior to running these cookies on your website.